Lisa Gerss from Germany and danish Thor Bendix Madsen took the win today at GARMIN CHALLENGEHERNING in a really Danish tri-weather. The men’s race was pretty close over the swim, but from the bike and then the run there were no doubt who would take the victory. The women’s race was tight all the way and it is only after the 12th km on the run course that Lisa took the lead.

The fastest swimmer was Jesse Hinrichs: he swam 23:09 minutes over the 1,9 kilometer. Wade followed closely, only 2 seconds behind, while Frederik Henes followed only 1 second after. The fourth and fifth were the two Danish athletes Thor Bendix Madsen and Benjamin Andersen only 16 seconds and 1 min and 16 seconds from the top, respectively.

After 90 km on the bike, it changed. Thor Bendix Madsen had the fastest time with 2:23:50 followed by Boris Stein (+1:17) and Tobias Dahl Thomsen (+2:55). Thor just kept going strong and extended the lead on the run course where he was in front all the time.

“It was amazing to race in Herning. It is a nice course, and it is just so nice to be back on track”, said Thor Bendix Madsen, who won the race after a year full of injuries.

It was Caris Dempster, Shiva Leisner, Frederikke Idon-Andersen, Lisa Gers and Marion Tuion who formed the top 5 after the swim. Caris Dempster came out the water first after 26:47 – and the second followed by just 1 minute and 53 seconds, Caris Dempster. But already after 30 km on the bike, it. Two Danish athletes; Shiva Leisner was in front, followed by Frederikke Idon-Andersen (+4:00), and stayed there all the way on the bike course. Lisa Gerss was 3rd with +4:23 and Julie Aspesletten 4th with +5:15.

More changes during the run. Already after 4,1 km, Lisa Gerss went to 2nd place and she kept running fast. After 15,5 km she was first, and she stayed until the finish line. 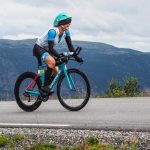 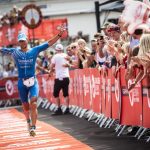